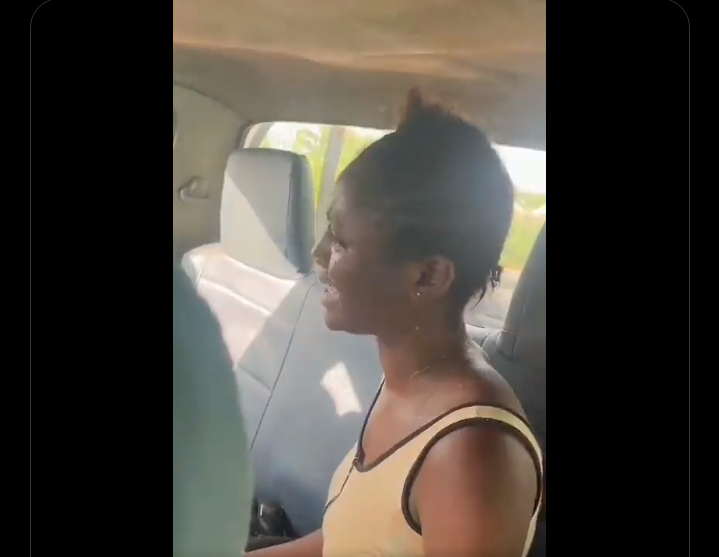 A lecturer at the Federal University of Lafia (FULAFIA) and his daughter have been arrested for assaulting a female student.

The police command in Nassarawa state confirmed the arrest of two suspects in a statement via its Twitter page.

Further reportage on the matter identified the arrested suspects as the lecturer involved and his daughter.

Earlier, a video surfaced on social media showing the FULAFIA lecturer, named Fred Ayokhai, ripping off the singlet of a young lady, identified as Blessing Mathias, with scissors.

The victim, who was sitting in the back of a vehicle, is seen shedding tears and pleading for lenience.

Although details were still sketchy as of when this report was filed, social media discourse said the male figure in the footage lectures in FULAFIA’s Department of History and International Studies.

It was said that the victim had beaten up the lecturer’s 18-year-old daughter named Emmanuella over a male lover.

The lecturer, it is gathered, then led his daughter’s siblings to assault the victim in retaliation.

It is understood that the victim was driven to the bush where she was stripped and beaten up over the conflict.

In its statement, the police command said two of the suspects involved in the said assault have been detained.

It also said the car used for the act has been confiscated for a thorough investigation.

The police command said efforts are ongoing to arrest some others who might be connected to the case.

“Sequel to the viral tweet of assault on a female teenager in Lafia, Nasarawa state, the Command swiftly commenced an investigation into the case,” the police stated.

“It is gratifying to state that, two suspects have been arrested in connection with the case while the vehicle used in conveying the victim to an undisclosed location where she was assaulted has been recovered.

“An effort is ongoing to arrest the remaining suspects still at large.”

Efforts to ascertain the details regarding the case proved abortive as Ramhan Nansel, the Nassarawa police PRO, insisted that a comprehensive press statement would be issued on the matter after further investigation.

The Economic and Financial Crimes Commission (EFCC) has arrested one Iredia Endurance, identified as a 19-year-old, over alleged fraud.

According to the anti-graft agency, Endurance allegedly defrauded one Christine Brown, a British citizen, of the sum of £450,000.

EFCC, in a statement on Tuesday, said Endurance was arrested by its Benin zonal command following a petition by Brown.

The anti-graft agency said the suspect confessed that he received the money in Bitcoin and gift cards.

“Endurance, who claimed to be 19 years old, was recently arrested by the commission sequel to a petition by one Christine Brown, a British citizen, alleging that the suspect defrauded her of £450,000,” EFCC said.

“Upon arrest, the suspect confessed he received £250,000.00 from the complainant in Bitcoin, FedEx, and gift cards.

“On what he did with the money, the suspect averred that they were expended on cars, gold chains, landed properties, among others.

“Some of the items recovered from the suspect include mobile phones, laptops, sim cards and landed property.

“The suspect will be charged to court as soon as investigations are concluded.”

Bill Cosby, the US actor and comedian, has been sued by five women who claimed he drugged and sexually assaulted them during their early stage in show business.

According to TMZ, the women — most of whom were involved with ‘The Cosby Show’ — filed a lawsuit against the actor for allegedly being a predator instead of a mentor to them.

In the suit, Lili Bernard, one of the plaintiffs, claimed Cosby drugged and raped her multiple times.

She also alleged he once threatened to “destroy her” if she reports to the US authority.

Others, in their separate accounts, claimed Cosby either assaulted or forced himself on them.

The plaintiffs also sued the company who helped produce the show — NBCUniversal Media, LLC, Kaufman Astoria Studios and The Carsey-Werner Company — for failing to protect them despite knowing about the alleged sexual assault.

He also described the lawsuit as a “frivolous” one that is about money and not justice.

“As we have always stated and now America see that this isn’t about justice for victims of alleged sexual assault but it’s all about money,” he said.

“We believe that the courts as well as the court of public opinion will follow the rules of law and relieve Mr. Cosby of these alleged accusations. Mr. Cosby continues to vehemently deny all allegations waged against him and looks forward to defending himself in court.”

The ace comedian has been accused by several women of sexual assault over the years. He has, however, denied all the charges. 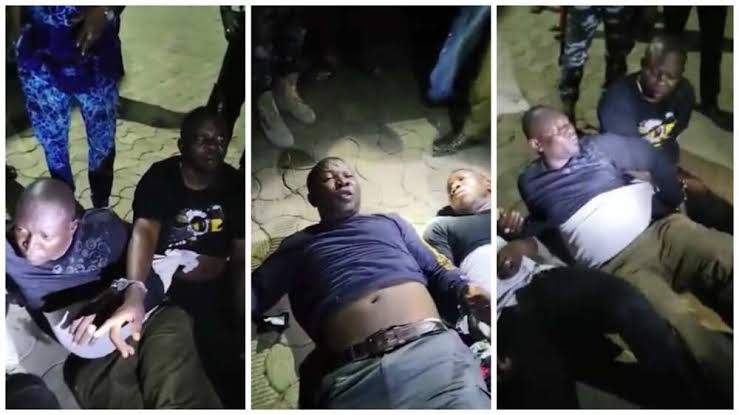 It was gathered that the incident happened on Saturday night, just as the suspected assailants were said to have trailed the Senator who is seeking his second term into the Senate in 2023 from Abuja to his residence along the popular old Alheri Clinic road, Tunga area in Minna.

Unknown to the assailants, Senator Musa had returned to Abuja in the afternoon before they invaded the house in the night.

Although the state police command was yet to issue a statement on the development as at the time of filing this report, it was gathered that the suspected assailants secured the services of two people, fully armed and in Military uniform who accompanied them to the residence of the Senator at about 8:00pm.

According to the source, the two suspects in Military uniform had mounted surveillance at the entrance gate to the Senator’s house while the four others in civilian dresses entered the house after they had identified themselves to the Policemen at the gate that they were from the office of the National Security Adviser (NSA) Abuja on a search mission.

According to a source close to the Senator’s house, the suspects had told the policemen at the gate that they received information that there were stockpiled arms and ammunition, including some foreign currencies in the Senator’s house.

They immediately dispossessed the Policemen of their mobile phones, attempting to enter the house before luck ran out of them when information got to a close ally of the Senator who is the Special Adviser to Governor Sani Bello on political matter, Alhaji Nma Kolo that some armed men had stormed the Senator’s house.

On receiving the distress call, the governor’s aide immediately alerted the APC Governorship Candidate in the state, Alhaji Umar Bago who mobilized and bravely stormed the house that night where the suspects were rounded up.

It was also gathered that the suspects had lodged in a hotel in Minna ahead of the attack on the law maker’s house as the motive for the action was still unknown as at the time of filing this report.

Saturday’s episode is the second of such attack on the Senator Musa ‘a house targeting him. The first was attack in his Minna residence and that was about two years ago when some armed men, in a similar manner invaded his residence but did not meet him.

The State Commissioner for Internal Security and Humanitarian Affairs, Emmanuel Umar who confirmed the incident, said that the Police was on top of the situation and some arrests have been made to that effect.

He however appealed to the public to remain calm, saying that further details on the incident would be made public by the Police.